Comments can be made at the end of this page . . . it is easy and I would like to know how you enjoy the blog. If it not against your nature, please identify yourself.

If you don't want to leave a public comment, send them directly to LeePickles@epbfi.com

The Daylily Hybridizer's Summit meeting was held in Chattanooga on December 3-4, 2010 at the Chattanooga Choo Choo hotel. There were daylily images for everyone . . . round and bagel, spiders, doubles, unusual forms, patterns, etc., etc. Over 1,000 images were shown on Saturday.


I could rattle on for a long time on here and not be able to say it any better than Karol Emmerich of Minnesota wrote on the email robin: (Used with permission)

"A big thank you to David and Lee for organizing the Chattanooga hybridizers' event. They were very welcoming and supportive, and set the tone  for a great day. There were lots of gorgeous pictures, including: the deeply saturated and beautifully formed and Mary Baker(from David K); heart-throbbing purples and lavenders from Bill Waldrop, Mort Morss, Randy and  Ted Preuss, and Josh Jacques; double and triple edges from Tommy Maddox; patterns in colors I had never seen from Sandy Nall. Beauties from diploid breeders, doubles breeders, unusual forms and spider breeders, pattern breeders, and those who love the color yellow (like Lee's Wonder of it  All kids) also caught my eye even though those forms and  colors don't always "talk" to me the way the purples and roses do. It was  fun seeing the diversity, and the results of folks focusing their efforts  in specific areas.


But what impressed me the most was how much we enjoyed being with each other and the joy written all over the faces of those attending. Lots of smiles and beaming faces as folks talked about the flowers they were creating, the  videos they were making about daylily people (Charles Dorsey), the rewards of  being able to do the daylilies with the next generation of their family (like Dan and Ben Bachman), or the work they were doing outside  of daylilies (like William Marchant - an elementary school principal who clearly has a passion and vision for transforming the way kids are taught). So thanks again, David and Lee, for making it possible to be together."
After the meeting, we had several visitors to the greenhouse. Seedlings are growing nicely and several thought I would have bloom this spring in many of them. Here are some pictures. 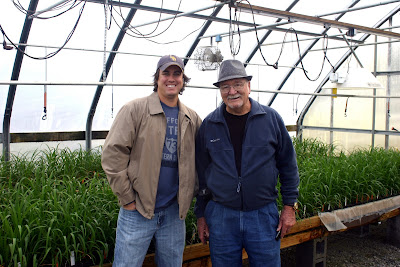 Josh Jaques from Louisiana and Tommy Maddox from Mississippi 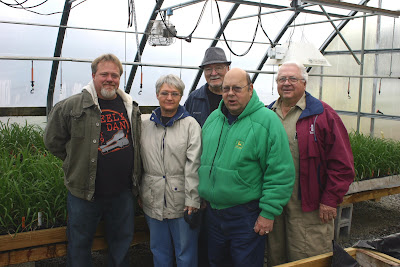 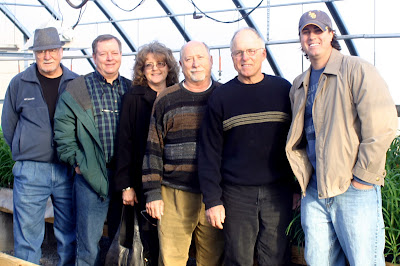 Another group was Tommy Maddox from Mississippi, James and Sandy Nall from Arkansas, David Kirchhoff and Mort Morss from Kentucky, and Josh Jaques from Mississippi.
I really think that Tommy Maddox left after the first picture, but as you know, an old penny just keeps showing up everywhere.
I hope you will plan to join us next year in 2011 for the Daylily Hybridizer's Summit on December 2-3 in Chattanooga, TN.
Now is the time to start planning to attend one of the many symposia that are coming up, including The Mid-Winter Symposium in Chattanooga, TN on January 21-23, 2011. Please join us and greet old friends and meet new ones.
Exciting things happen to those who hybridize daylilies!