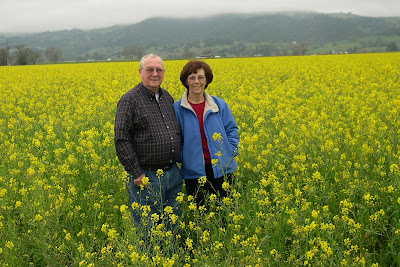 The land was paved with gold. Everywhere we looked we saw wild mustard growing . . . in the fields, in between the vineyard rows, up and down the sides of the roads. This is the time of year for the annual Napa Valley Mustard Festival. We found this field along a country road in the Alexander Valley (picture above) that seemed to go on forever. Wild mustard is a cover crop in the vineyards during the winter and in the spring is tilled into the ground as a natural source of nitrogen. 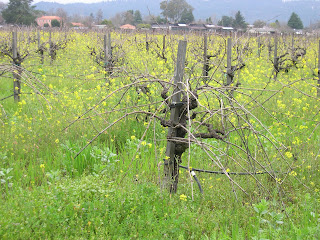 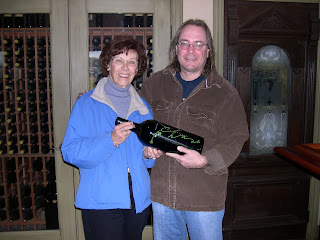 The picture to the left shows the mustard growing between the rows of vines at Chase Winery in St. Helena. Jeff Blaum, who through the years has become a friend, is the manager and winemaker. Their specialty is zinfandel, and excellent wine it is. Shown above is the Hayne vineyard, which was planted in 1903. The vine in the foreground is 107 years old. The picture above shows Jean with Jeff and a LARGE bottle of Chase Zinfandel.
Each trip has its special memories. There were two on this trip besides having Jeff Corbett and his friend Johnine Casdorph, and Jeff and Nancy Bailey who are daylily friends, join us. We are big fans of the movie "Bottle Shock" which chronicles (in loose fashion) the 1976 Paris wine tasting in which wines from California were paired against some of the finer French wines. Well, if you know the story, you know that this tasting turned the wine world upside down because it was thought that no wines could be as good as those of the French, yet a 1973 Chateau Montelena Chardonnay swept the competetion. To add insult to injury, a Stags Leap Napa Valley Cabernet Sauvignon took second place. 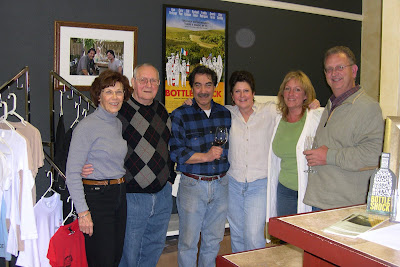 Above (L to R) Jean, Lee, Gustavo Brambila, Thrace Bromberger, Johnine Casdorph and Jeff Corbett in the GustavoThrace winery tasting room in downtown Napa. Notice the "Bottle Shock" poster on the wall.
One of the main characters in the movie "Bottle Shock" was Gustavo Brambila, played by Freddie Rodriguez. Gustavo was an assistant winemaker at Chateau Montelena during the time of the Paris competition. We were fortunate to be able to meet Gustavo and his partner,  Thrace and taste their wonderful wines. This was probably the highlight of the highlights of the trip. 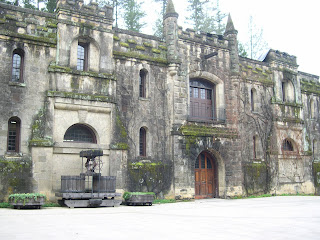 The second highlight was taking the "Bottle Shock" tour at Chateau Montelena in Calistoga, where portions of the movie "Bottle Shock" were filmed. It was great to hear the story, some true and some fiction, and to see where it was filmed. Above is a picture I took of the winery. It is more beautiful during the summer when the vines crawling on the face of the winery are all leafed out. 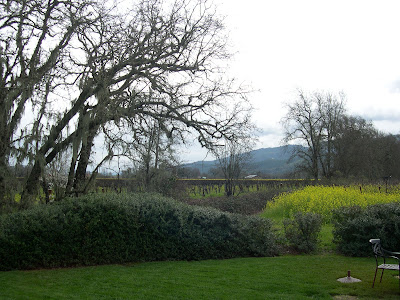 And one final landscape picture that I thought was quite beautiful. It was taken from the back patio at Bennett Lane Winery in Calistoga. The contrast between the leafless trees, the shrubs, the mustard, and the vineyards in the back was quite breathtaking.

It was a great trip and I look forward to the next visit the wine country.

Posted by Lee and Jean Pickles at 7:29 AM