Today is January 15, exactly 15 days since my last post showing the potted hybridizing plants as they appeared just after taking them into the greenhouse from outside. They had had plenty of cold weather and the evergreens were mushy and the dormants were dormant. Just 15 days from being taken in, you can compare the images today with the images in the last blog to see their progress. There are several dormant daylilies in this group. Many of those in the foreground of this image are dormant. Most noticeably are the ones in the second row from the right. Among those pots are Don Lovell's H. 'Selwyn' (2012), his H. 'Hawkeye Fringe' (2011), Joel Polston's H. 'Carnivore' (2010) and Jamie Gossard's H. 'Outer Limits' (2008) are all extremely hard dormant here.

Way back when I used to show my daylily greenhouse program with slides, I took three pots of daylilies into the greenhouse from outside and showed a series of slides with evergreen, semi-evergreen and dormant plants in pots. My first slide showed evergreen with considerable foliage, the semi-evergreen with slightly less foliage, and the dormant was showing no foliage at all. If I remember correctly, I showed the growth with slides week by week. Within 8 weeks, the dormant had caught up in growth with the other two. 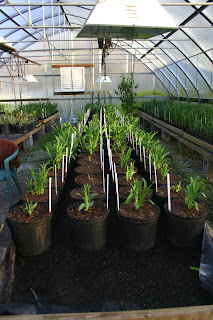 This is the right center bench, image taken from the front of the greenhouse. The plants show considerable growth in just 15 days. The dormants are quite evident. 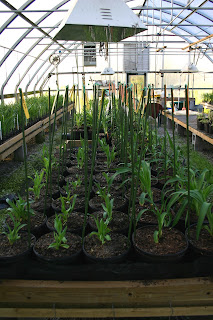 This image is the right center bench taken from the rear of the greenhouse. Compare it to the image in the previous blog page.


On Saturday, January 7, Jean and I took a cruise up the Tennessee River to the Hiwassee River Conservancy area to view the Sand Hill Cranes which are in their migratory to winter nestings. I don't know what we expected, but we were a little disappointed because the boat had to stay in the river channel and we could not get very close to the birds. However, at times there were thousands in the skies. Here is an image showing them in the air. 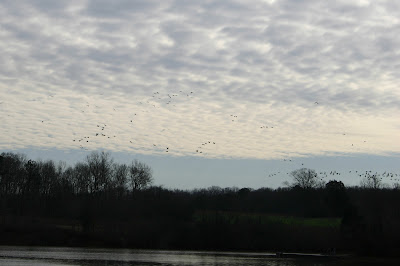 As always, we thank you for visiting our blog. Please leave a comment below. Left click on the images for a larger view.