What is blooming in the greenhouse 4/3/11

Left click on an image to see it in a larger size. 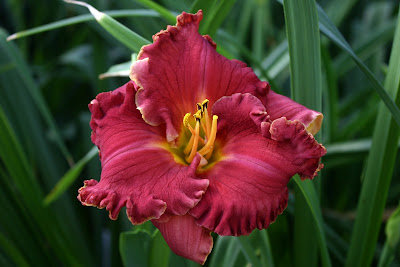 H. 'Awesome Bob' (Pickles, 2001) bloomed for the first time in the greenhouse this morning. This has an interesting story behind it. In the fall 1995, Bob Carr called me and said, "I did not get my full compliment of 30,000 seeds this year and do you have about 1,000 seeds you would like to send me? I will plant them this fall and we will see them bloom next spring." Guess what I said? Among the 1,000 seeds I sent, were either 16 or 17 seeds of a cross of (Ida's Magic X Velvet Beads). The next spring, Bob called me one day and said, "Lee, you will never believe one of your seedlings that bloomed today. It is a very ruffled red and way ahead of it's time." That fall, he split it and sent me a couple fans and he kept a couple fans to increase for me. It was a fast increaser and we had a couple hundred fans for release in 2001. In the early MWS days, Bob always used to show a slide prior to his introductions stating, "Awesome Bob Carr's Daylily Seedlings", thus the origin of the name. I had the number needed for introduction in the greenhouse in the winter of 2000 and spring of 2001. Something happened that year and I lost every plant inside of the greenhouse (named varieties, seedlings, everything). At the same time, the greenhouse cover was split. We never did discover what happened. Luckily, Bob had enough fans for the orders. The last two years above have been corrected from 1990 and 1991 to 2000 and 2001.

Seedling No 9023 [Spring Formal X Seedling No. 0742 (Mandalay Bay Music X Wonders Never Cease)] You can see some light sculpting in this seedling probably from Seedling No. 0742. I am using it in my eyed and edged sculpted breeding program. Remember, the top image is the pollen parent, the bottom the pod parent. This is from the crop of seedlings that bloomed for the first time out in the field in 2009. 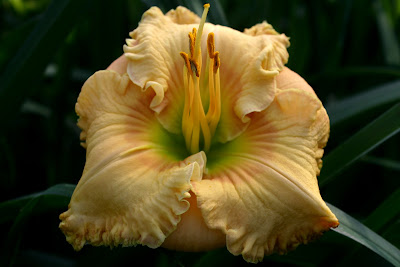 Seedling No. 9023 [Spring Formal) X (Mandalay Bay Music X Wonders Never Cease)]
The second seedling in bloom today was Seedling No. 0028 (Some Sweet Day X Serenity Bay). This seedling first bloomed in the field in 2010 and selected to pot and take into the greenhouse to use in hybridizing. 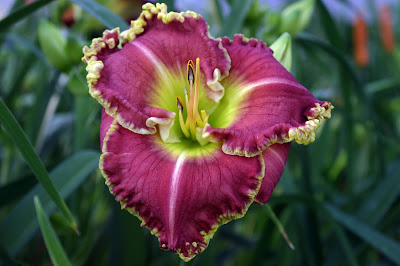 And the final seedling for today is Seedling No. 0026 (Christmas Greetings X Awesome Bob). Another seedling to bloom in the seedling field in 2010, potted and taken into the greenhouse for hybridizing. A red of impeccable color, form and ruffling. A barely perceptible halo is present. 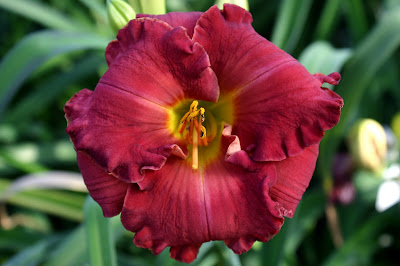 Seedling No. 0026 (Awesome Bob X Christmas Greetings)
There you have today's edition of the DaylilyPotpourri blog. I hope you enjoyed it.
Life is very, very good.
Lee
Posted by Lee and Jean Pickles at 1:21 PM