Left click on image for a larger version.
I want to share with you my trip back to Iowa for the Pollen Dabbers meeting sponsored by the Central Iowa Daylily Society in Marshalltown, IA. Don Lovell and Phil Fass are the two driving forces behind this meeting along with CIDS members who furnish treats and eats.

My trip began early (4:30 am) on Thursday, March 17 when I woke to get ready for a 6:40 am flight from Chattanooga to Atlanta where I had a two hour layover. From Atlanta to Des Moines took approximately 1 hour 45 minutes and the plane arrived at 10:49 am. I grabbed my luggage and hopped in my rental car, the excitement of being back in my home state escalating. I always arrive a day early so I can go back to Colfax, where I grew up and Colo, where Jean grew up.

I always take this opportunity to visit the graves of our parents in Colo and Colfax. I image when we are gone, there will be no more visits to these graves. Jean and I already have our headstone set in the Colfax Cemetery so we know where we are going to end up.

I drive past the Now closed Presbyterian Church where I first saw Jean sitting on the steps one Sunday with a friend, a classmate of mine. The got up and walked to Werick's Drug Store, which by the way is still there and looks very similar to that date in 1954, for a Coke. I followed and wrangled an introduction! Our first date happened about 3 weeks later on May 22, 1954, following my HS graduation ceremony. I even remember where we went on our first date. My cousin, Johnny Runyan, was dating a girl in my class, and we decided to double date and go to Mama's Pizzeria in Des Moines, IA. You need to remember, this was 1954, and a couple kids from small towns had never heard of pizza. Our first try . . . we hated it.

I also like to drive around both towns and remember the homes we lived in and some of the memories associated with them. The 30 miles of Hwys 117 and 65 from Colfax to Colo brings back memories of when we were dating. When I first started the trek, Hwy 117 was about 15 miles of dirt and rock road. I can still feel the washboard road travel up from the tires on my car to my seat! At that time I had a 1950 bronze Ford that when shiny, was very pretty. I would spend hours cleaning and polishing this car only to travel 15 miles on that damn dirt road.

Another reason that I alwasy go a day early is so I can partake of the best comfort food in the whole world, Maid-Rite sandwiches. I spent my first two college years at Ellsworth Community College in Iowa Falls, IA. Jean and I were married and she taught in the local school system to put me through college. While there, I met Danny Holtcamp. Why is this significant? Well, eventually Danny purchased the Maid-Rite Restaurant in Newton so I always use the excuse of visiting him so I can eat Maid-Rites. Below is a picture of the restaurant that I took about a week ago and I can't see that it has changed much since I first started going there in the 50s. 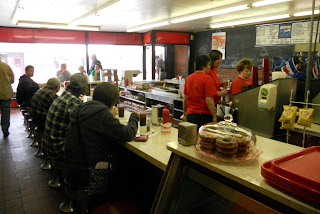 You can see that there is a counter surrounding the cooking and preparation area. If you are not familiar with Maid-Rites, they are simply loose hamburger that is steamed instead of fried. Dan purchases beef shoulder and grinds it to his own specifications. In fact, he tells me the secret is to grind it twice. Here is a picture of one of my meals. 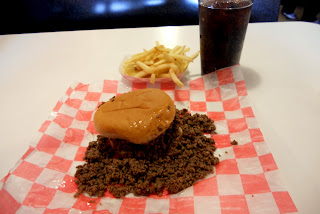 Enough memories, let's get back to Pollen Dabbers. I arrived on Friday afternoon and immediately spotted Don Lovell checking into the hotel. He said that Bob Pappenhausen had called from the hotel next door and invited us up for a drink. Well, it got to be like old home week in the bar as others began to arrive. The meeting started on Friday evening with, what would you guess, a Maid-Rite dinner. Don and I went to the Marshalltown restaurant and picked up a bunch of Maid-Rites and milk shakes for everyone to enjoy. In addition, CIDS members brought snacks and desserts. After we pigged out, the meeting started. Friday night is almost always reserved for CIDS members to show their new seedlings and introductions.

Up on the podium, CIDS hybridizers Kathy Larsen, Phil Fass, Don Lovell, Nan Ripley and Barb Pappenhausen amazed the group with their creations. This was Barb's first time to present her hybridizing program and she did a wonderful job.

Saturday morning began with hybridizers Bob Wilson, Lynn Stoll, Gerald Hobbs, Mike Grossman showing their creations and then it was my turn. The morning ended with gary Schaben and Karol Emmerich sharing their images. So much diversity among this group, from dips to tets, and from spiders to bagels.

Moving to the afternoon, one of the guest hybridizer's, Bob Tankesley-Clarke showed their program and the variety in their Missouri garden. Sandy Holmes, another guest, showed us where she has been and where she is going with her unusual forms program. Some exciting things on the horizon. Next, Mike Holmes showed his "teeth" program and where they originated from.

To wind up the meeting, Karol Emmerich and Mike Holmes took us on a tour through the new AHS Portal. It appears that there is nothing this program can't do. Here is a picture of the Pollen Dabbers group taken by Kyle Billadeau on Nan Ripley's camera . . . so thanks to both of them.

The group, almost 40 strong, came together to look at daylily images, but will always remember the people and the friends.


Life is very, very good.
Lee
Posted by Lee and Jean Pickles at 7:46 AM