Left click on image for a larger version.
This is an exciting time of year here at Chattanooga Daylilies. We can hardly wait until this time is here and then it seems that in an instant it is gone. Yes, I am speaking of daylily bloom. Yesterday morning, we had four blooms open and could not wait to get the pollen out of the freezer and start spreading. But then, maybe to get things started, I will use live pollen from things that are blooming.

We have three different "layers" of potted plants in the greenhouse. 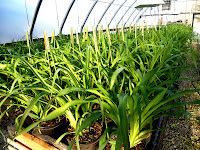 The first "layer" are the named varieties and the 2010 selected seedlings that we potted last September and they remained outside until early December, when after some very cold freezing weather, they were taken into the greenhouse. They are shown here on February 19, about a month and a half after being taken into the greenhouse. These are the plants that are blooming right now.

The second "layer" are the new potted seedlings. The seeds for this group were made in the greenhouse in the spring of 2010. The seeds were started in 2" X 2" X 3" peat pots in August, then transplanted to trade one gallon pots in September/October. Many of these 8 month seedlings have scaped and will be blooming soon. These are the most exciting to me, since I will be seeing the bloom for the first time. When it warms sufficiently, they will be moved outside. 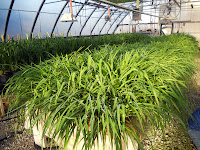 The third "layer" are the seedlings growing in No. 38 Seed Trays. Again, these seeds were made in the spring of 2010 in the greenhouse, planted in bulk trays in September/October, and transplanted to the No. 38 Seed Trays in October/November. There are somewhere around 3000 of these seedlings. They are shown here just before receiving a haircut in mid March. The foliage had just gotten too long and when overhead watering it was bending over allowing the water to run off onto the ground. There were a few of these seedlings showing scapes. I did see a couple of them and was able to save cutting them. I can't imagine they will amount to much anyway. These seedlings will be planted outside in April.

One of the plants blooming yesterday was a 2010 selected seedling. Seedling No. 0931 (Elegant Expressions X Unknown Seedling). This is a bi-color with a cream watermark and ruffled edge. I liked the contrast between the lavender rose petals and cream sepals. About a 5" flower.

H. 'Cerise Masterpiece' (Stamile 2003) and is one of my favorite cherry red daylilies highlighted by a white watermark. It has plenty of scape height and is being used in my hybridizing program for reds.

A seedling from Jeff Salter with the garden name of Better By Design. The colors are wonderfully bright and bold. I especially like the eye pattern on this one.

"Where did this come from?" you may ask. If confronted, I will never admit it, but I do like the whimsical cascading daylilies, and particularly, the chevron pattern. This is H. 'Free Wheelin' one of Pat Stamile's creations. I have been trying to set seed on this one for a couple years and contrary to the description stating that it is pod fertile, I have not been able to set any seed on it. I may try it's pollen on a couple things this year.

There, you have it. The first day of more than one bloom open. I hope you enjoyed the blog.


Life is very, very good.
Lee
Posted by Lee and Jean Pickles at 5:30 AM